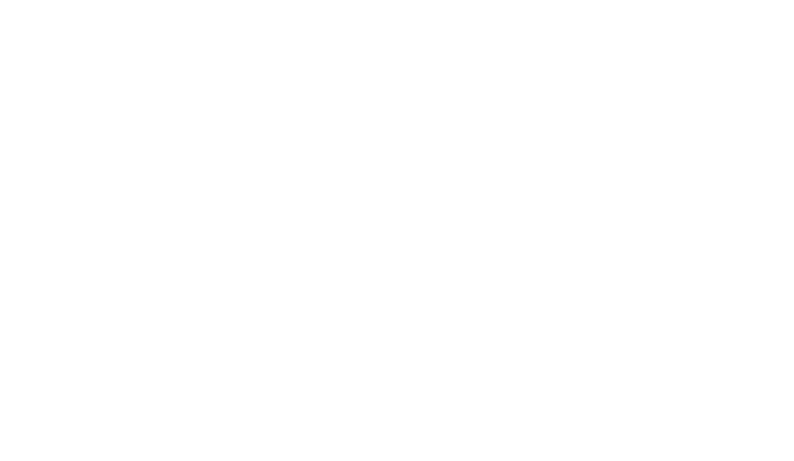 While during the past decade typically around 71-73% of Year 12 students were enrolled in one or more mathematics subjects, things took a turn for the worse in 2020, with a sudden drop in maths subject enrolments to a mere 66%.

Both in the number of students as well as the proportion of the total student cohort, the participation in intermediate and higher mathematics subjects has plummeted to an all-time low – significantly lower than the previous decade in which participation already could be described as minimal.
Altogether, in 2020 only 26.8% of students with a Year 12 qualification studied mathematics to at least intermediate level, compared to 30.6% in 2019 and 34.9% in 2008.

Only 37.8% of the students undertaking higher mathematics were female. In intermediate mathematics, the gender balance was nearly even, with more than 49% female students. Around 52% of students completing Year 12 were female.

The Australian Mathematical Sciences Institute (AMSI) has collected data on participation in mathematics subjects in Year 12 for many years. Collecting enrolment data in individual maths subjects is not just important to get a sense of how many students finish high school with some mathematics under their belt. It is also crucial to know at what level they study mathematics in Year 12 to know how prepared they are for tertiary study. What the AMSI data collection continues to show is that the proportion of students taking more advanced, calculus-based levels of mathematics as their “highest” maths subject has been in long-standing decline.

The latest data from 2020 show a further significant decline that takes maths participation in Year 12 to an unprecedented low. It seemed that in the last decade or so Year 12 enrolments in mathematics in Australia remained at least stable – albeit at a low level – as a proportion of all students who complete high school exams. However, any hope of improving enrolment numbers or even holding the line must be dashed for the foreseeable future. While during the past decade typically around 71-73% of Year 12 students were enrolled in one or more mathematics subjects, things took a turn for the worse with a sudden nosedive in 2020 to a mere 66%.[i]

All this must be seen against the backdrop of a growing Australian school population, with increasing numbers of students staying in school until Year 12 and going to university afterwards. The number of students completing Year 12 with a secondary school certificate (such as the HSC in New South Wales, the VCE in Victoria and so on) has been steadily growing. In 2008, around 181,000 year 12 students completed school with a qualification. Since 2012, that number has exceeded 200,000 every year, with a peak of 219,000 in 2017.

Moreover, between 2008 and 2020 the number of domestic students starting university has grown substantially, from roughly 180,000 new bachelor students in 2008 (106,000 in the 16-19 age group) to more than 256,000 in 2020 (with over 139,000 between the ages 16-19).[ii] TThe number of domestic students embarking on an undergraduate STEM degree grew by more than 65%, from 35,498 in 2008 to 59,562 in 2019.[iii]  Many degrees in other areas such as Management and Commerce and Health also have significant quantitative components. Annual new enrolments in undergraduate Health degrees alone increased by over 80% in the same period.[iv]  However, the increasing academic aspirations have not been accompanied by a similarly growing take up in Year 12 of mathematical subjects at intermediate and higher levels intended to prepare students for university study in these types of degrees.

Most states and territories broadly follow the Australian Curriculum, except for New South Wales. Note that we classify students from New South Wales who study at least Extension 1 as “higher” mathematics students, even though technically only students who study both Extension 1 and 2 are deemed fully equivalent to students of Specialist Maths in other states.[vii]

In this paper we have included data for all Year 12 mathematics students enrolled through the secondary boards of studies and the Australian International Baccalaureate (IB) in all states and territories, for the years 2008 to 2020. Keeping in mind that students often enrol in mathematics subjects at more than one level—for example in both an intermediate and higher maths subject – where possible we display the most advanced level of mathematics students have chosen, with overlapping enrolments in lower level maths subjects taken out. The figure below therefore gives the best indication of the level of preparedness of students to enter university degrees—especially degrees with a mathematical component such as science, engineering and commerce.

The total number of students in intermediate and higher maths peaked in 2018 before dropping significantly in 2019. For the most part, the 2019 drop in numbers could be explained by the fact that in one state the 2019 graduating cohort was smaller than normal – this did not affect the overall proportion of maths students.

However, in 2020 the numbers of higher and intermediate students significantly decreased further still, while the Year 12 student cohort reverted back to the size of previous years — resulting in a serious decline in participation in higher mathematics of 0.9 percentage point to 9.2%, and of 2.9 percentage points in intermediate mathematics, to 17.6%. Both in the number of students as well as the proportion of the total student cohort the participation in these mathematics subjects plummeted to an all-time low — significantly lower than the previous decade in which participation already could be described as minimal.

The location of the decline can be traced back to one state, which changed its examination system in 2020, and where Year 12 maths enrolments collapsed. Over time, the effects of these exam changes might — and hopefully will — be overcome. 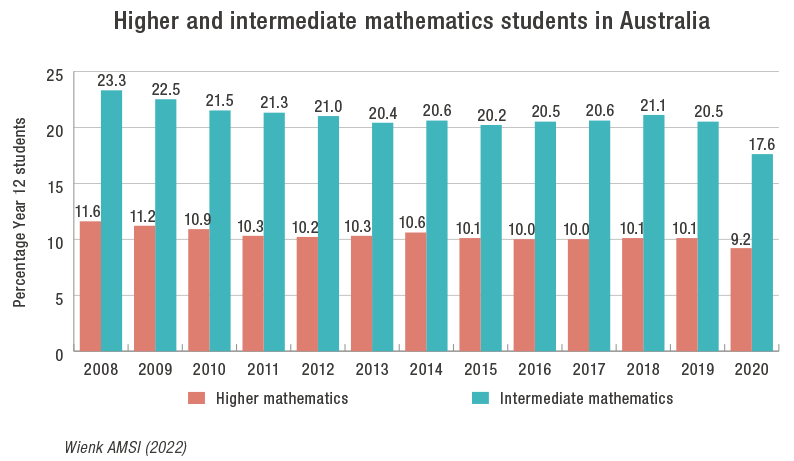 In 2020 only 37.8% of the students undertaking higher mathematics were female, which stands in stark comparison to the fact that there was a larger proportion of female students (nearly 52%) completing Year 12. 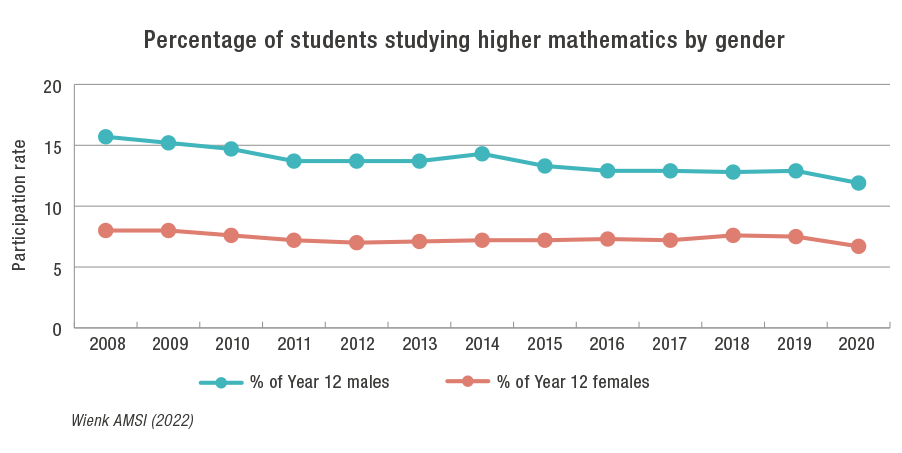 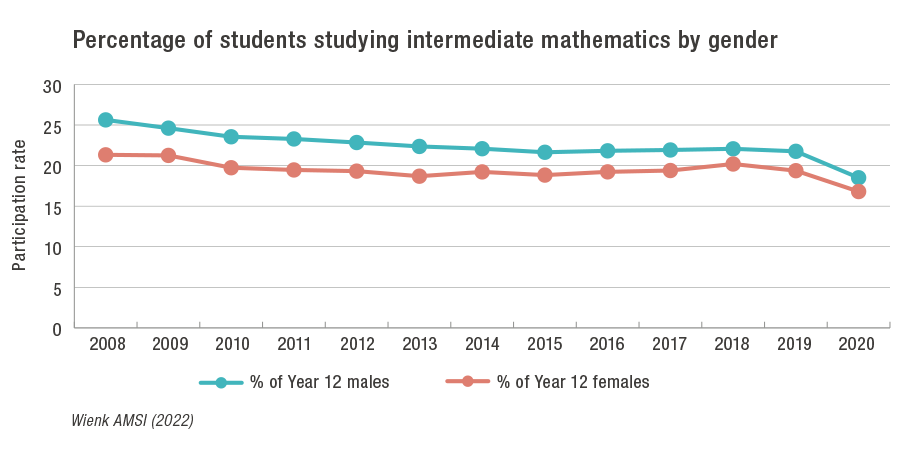 The elementary category includes studies equivalent to both Essential and General Mathematics in the Australian curriculum. As with higher and intermediate maths, students may be enrolled in more than one subject. However, given the variety of elementary subjects in different states, it is not possible to reliably estimate how many students combine an elementary with an intermediate subject or are enrolled in two elementary subjects. In addition, some studies count towards the students’ ATAR scores and some do not. In this section we therefore only include unadjusted enrolments in General Mathematics or equivalent, as these are generally counted towards the ATAR.
In 2020 there were 98,117 enrolments at the level of General Mathematics. The enrolment numbers have declined considerably from 2018 after a period of growth. There have been changes to courses and assessment practices in the period 2016-2020. These along with other factors which cannot be determined from the data alone are likely to be responsible for the decline in numbers. In some states, the enrolment in Essential level mathematics (generally not counted towards the ATAR) seems to have increased to the detriment of General Mathematics, which warrants further investigation.

Note: AMSI would like to thank Frank Barrington, Michael Evans, Michael O’Connor and Susan James for their invaluable efforts in driving and maintaining this annual data collection.