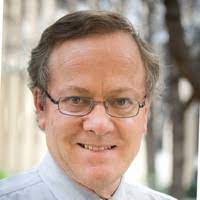 The most prestigious honour bestowed by Australian and New Zealand Industrial and Applied Mathematics (ANZIAM), the award recognises research achievement, impact on applied and industrial mathematics and contribution to ANZIAM.

An Emeritus Professor at La Trobe University, Professor Broadbridge was the Director of AMSI from 2005-2009, during which AMSI was awarded a $2M Collaborative and Structural Reform grant that funded a number of AMSI’s Higher Education flagship programs, as well as establishing APR.Intern. Phil was also presented with the 2008 Fast Thinking / Open Universities National Innovation Award in the category of science innovation on behalf of AMSI.

“Phil was a driving force in key areas of development for AMSI and its vision for the mathematical sciences in Australia and New Zealand. We are delighted to see him recognised with the ANZIAM Medal for his outstanding leadership and contributions,” said Professor Marchant.

More information on the ANZIAM Medal is available here.
Phil has also been presented with the AMSI Distinguished Service Award. Read more about his outstanding contributions to AMSI here.
Recent Posts
We acknowledge and pay respect to the Traditional Owners of the land upon which we operate
ABOUT US