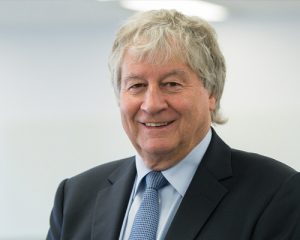 AMSI conveys its warm congratulations to Sir Adrian Smith upon his election as President of the Royal Society, a role he will assume at the end of November.

A highly distinguished statistician, Sir Adrian was President of the Royal Statistical Society from 1995 to 1997 and is a recipient of the Guy Medal (in gold, silver and bronze classes). He was appointed as Knight Bachelor by the Queen in the 2011 New Year Honours list.

Sir Adrian’s accomplishments include leading Queen Mary University of London as Principal (1998-2008), as Director-General for Knowledge and Innovation in the UK Government (2008-2012), leading the University of London as Vice-Chancellor (2012-2018), and more recently as Director of the Alan Turing Institute. He is also well known in the United Kingdom through leading two prominent inquiries into maths education and teaching. Sir Adrian was the doctoral supervisor of Sir David Spiegelhalter, himself a Guy Medalist in the gold class.

“Of the 61 Presidents of the Royal Society since its foundation in 1660, Sir Adrian Smith can be regarded as the first statistician elected to this office”, said AMSI Director and fellow statistician, Professor Tim Brown. “He is closely connected to Australia through distinguished and much-appreciated appearances at the Statistical Society of Australia conferences including a keynote speaking role in a joint conference with the US based Institute of Mathematical Statistics and the Interface Foundation of North America. Sir Adrian is also highly regarded for his 2006 review of Australian statistical education.”

“Sir Adrian has many friends and admirers in the statistical scene in Australia, and his appointment as President of the Royal Society signals the fundamental importance of mathematical sciences to science as well as to the broader community”, Professor Brown added, “On behalf of AMSI I have passed on our very best wishes to Sir Adrian upon his significant election to this prestigious and influential role in the science globally.”