The following report adds to the data previously collected by Frank Barrington, detailing the Year 12 enrollment figures in mathematical studies in Australia. The data includes the participation rate for all states (VIC, QLD, NSW, SA, WA and TAS) and territories (ACT and NT).

The number of students completing Year 12 has been steadily increasing in Australia. During the last ten years it has grown by approximately 15% and in 2017 it reached its highest ever with over 230,000 students (231500) completing their Year 12. Of this cohort 51.8% were female and 48.2% were male. There were less than 0.02% of students identifying as Gender X so, for the purpose of this report, we have only recorded gendered data for male and female.

The NUMBER of Australian Higher mathematics (Level D) students were:

The NUMBER of Australian Intermediate mathematics (Level C) students were:

The total number of students enrolled in both Level D and Level C studies increased in 2017. However, as the total population of students completing Year 12 also increased, therefore this meant that the percentage of students undertaking mathematics at a Higher level actually decreased from 9.5% in 2016 to 9.4% in 2017. This is the lowest level recorded in more than twenty years.

In 2017 only 37.8% of the students undertaking a Higher level mathematics study were female, which is a stark comparison to the fact that there was a larger proportion of females (51.8%) completing Year 12. 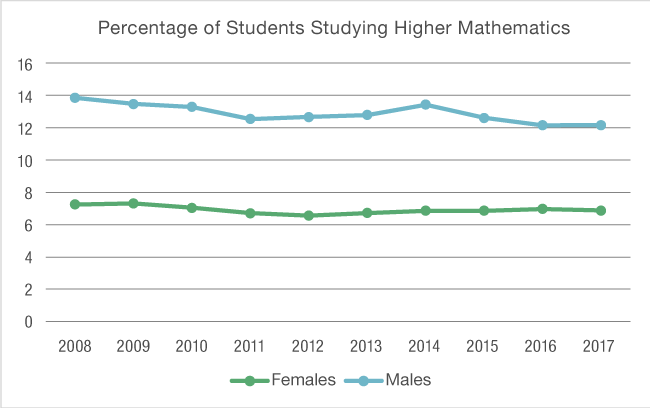 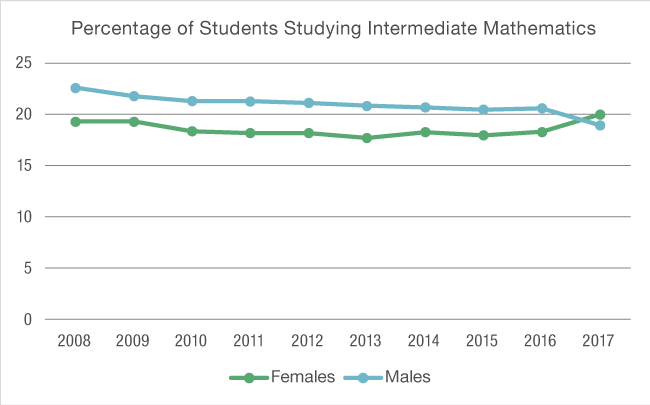 The NUMBER of female and male Australian Intermediate mathematics:

The Elementary category includes studies equivalent to both Level B and Level A in the national curriculum. In addition, some studies count towards the students’ ATAR scores and some do not.