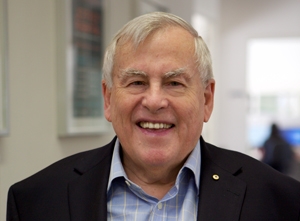 As the second Chair of the AMSI Board, Ron oversaw the remarkable period of expansion of AMSI’s funding and activities during the period from late 2011 to early 2019.

Ron’s wisdom, perception, intellect, wit, experience and network of contacts have always been the strong basis of his many contributions to AMSI. His skill in chairing meetings, negotiating difficulties, hands-on personal style, fearless advice, deep commitment and system-wide perspective have been a tremendous asset to AMSI and its staff. The ability to smooth ruffled feathers has been an added bonus. Ron has understood the place AMSI holds in the public sphere, and ensured that AMSI is at the table when it should be.

There is great affection for Ron amongst AMSI staff and Board members. Partly this is just his personal qualities, but it also reflects the time and care he has taken with individual concerns. Ron has always walked the second mile and both Directors of AMSI with whom he has worked have appreciated this greatly.

All this drew on a lifetime of service in CSIRO and more broadly in statistical science. Ron joined the Division of Mathematics and Statistics in 1969 and became chief of the Division in 1988, later managing its merger with the Division of Information Technology. In 1999 he became Deputy Chief Executive of CSIRO and led the Flagship Initiative. This involved six major cross-disciplinary research programs and was aimed at addressing problems of a national priority.

Ron chaired the watershed 2010 review of AMSI with three distinguished international colleagues. It redefined AMSI’s relations with its members and set AMSI’s directions for the following period. As Chair, Ron then oversaw the implementation of the review. The relationship with the University of Melbourne as lead agent was clarified by the review and there was a refresh of AMSI’s Vision and Mission statements in early 2011. AMSI’s 2013 Strategy Day was a significant event identifying five key strategic pillars for the Institute and establishing marketing and communications as a key aspect of AMSI’s operations.

In recognition of this service and to other mathematical sciences organisations, AMSI’s Lead Agent, the University of Melbourne, conferred a DSc on Ron, to the acclaim of the Institute. Ron has had a remarkable career as a leader of our discipline and his contribution to AMSI ranks amongst his best achievements!