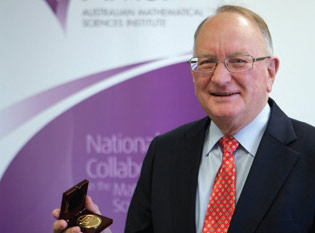 As the Foundation Chairman of the Board, Jim Lewis guided AMSI through its first 10 years with the vigour and expertise that comes only from experience. A BHP executive, a successful businessman, a chemical engineer and a distinguished university lecturer, Jim was exactly the sort of over-achiever that AMSI’s architects wanted as independent chair of the board. Jim relentlessly pursued AMSI interests, effortlessly providing advice and inspiration to AMSI’s staff and providing the business orientation that led to our significant successes with government and industry.

To quote from the AMSI Review report:

“AMSI was fortunate to attract the services of Jim Lewis, a former BHP executive, as Chair of its Board. Jim has been inspirational in his unflagging efforts on behalf of AMSI. A brief summary of his contributions include maintaining AMSI’s relationship with the University of Melbourne, appointing and mentoring a series of AMSI Directors, negotiating complex contracts such as BlueScope Steel’s involvement in the ICE-EM outreach program, taking a hands-on leadership role when there was no director and direct involvement in negotiations to bring significant funding to AMSI. The Panel salutes this massive contribution without which AMSI’s survival would have been jeopardised.”

Jim is held in the highest esteem and affection by AMSI’s staff, past and present.