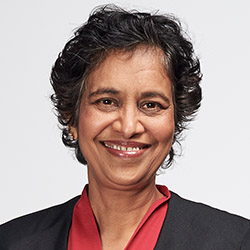 Announced over the weekend by the Victorian Government’s Minister for Women, Gabrielle Williams, the 2021 Victorian Honour Roll of Women inductees recognise women from all walks of life who have made outstanding contributions to the Victorian community.

Professor Asha Rao is a mathematician by training and applies algebraic techniques to a wide variety of problems, ranging from designing better codes for communication, to detecting money laundering and describing human interactions in the physical space. Her research has led to traditional outputs such as grants and publications, and non-traditional outputs such as an art installation, invitations to closed and open meetings on cybersecurity as well as to observe the United Nations intergovernmental meetings on cybercrime. As a cybersecurity expert, she appears regularly on audio visual and print media and has won RMIT Media star awards.

Professor Rao led AMSI as Interim Director from August 2020 to December 2020, in addition to her current role as Associate Dean of Mathematical Sciences at RMIT University.