Transparency is needed on the status of mathematically prepared teachers in Australia, as swelling secondary student numbers and a drought in mathematically qualified teachers sounds crisis bells, according to a report released today by the Australian Mathematical Sciences Institute (AMSI).

Australian secondary student numbers are expected to soar by over 650,000 as universities struggle to attract mathematics graduates to teaching and little data on mathematics preparation in teaching qualifications is available. Entrenched and severe, a report released by AMSI last year revealed the problem is too large to be solved by attempting to increase the number of new graduate teachers alone.

Australian Secondary Mathematics Teacher Shortfalls: A Deepening Crisis warns isolated solutions such as initiatives to boost the flow of maths graduates into education will fall short of tackling an issue that has been worsening over three-decades. AMSI Director, Professor Tim Brown says urgent action is needed to set rigorous subject knowledge benchmarks in teacher qualifications, transparency of the status of Australia’s mathematically prepared teacher workforce and retraining for those already in the classroom.

“The AMSI study is important in reminding Australia of this long-standing unsolved problem. When I was President, the Council of Deans of Science released an important study by Kerrie-Lee Harris and Felicity Jensz in 2006 on the extent of out-of-field mathematics teaching. The public reaction was strong but unfortunately there was no successful  follow-up,” he says.

AMSI Schools Teacher Outreach Manager and one of the paper’s authors, Michael O’Connor warns recruitment of new teachers would have little effect without measures to strengthen the current workforce.

“It is critical any solution takes a long-term approach with focus on strengthening both new and existing teachers’ mathematical knowledge and confidence. AMSI released modelling last year that shows quick fixes to address out-of-field maths teaching will not be enough to address this issue,” he says.

Co-author and AMSI Honorary Senior Fellow, Jan Thomas OAM, said the worsening crisis is a result of over three decades of inaction by Australian governments, both federal and state.

“This paper demonstrates the historical failures that have contributed to the current crisis in our classrooms. The number of mathematically prepared teachers in Australian has been in decline since the 1980s. The mathematical community including AMSI has been calling for action for decades,” says Thomas.

Australian TIMMS results remain behind England and the USA as per the graph below. Both Countries have introduced measures to tackle out-of-field teaching. 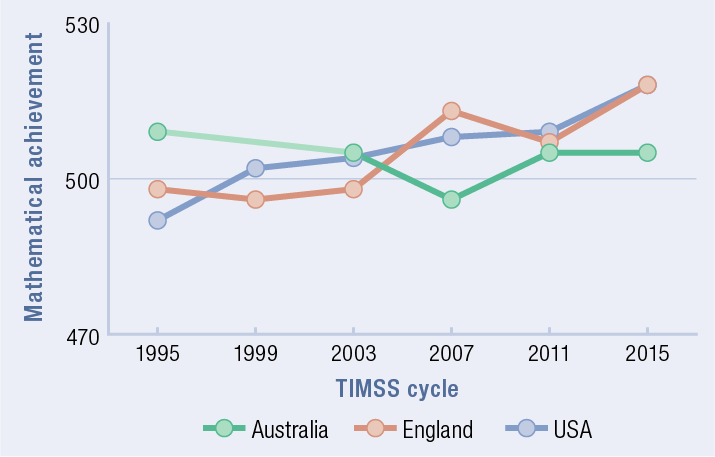 AMSI is the collaborative enterprise of Australia’s mathematical sciences. Established as an independent platform and advocate for the discipline, the Institute has built a record of national and international achievement as the recognised leader in delivery of services, activities and strategic initiatives across the mathematical pipeline.

Working with key discipline, government and industry partners, AMSI delivers its mission through through the delivery of activities and engagement under its program areas across school education, research training, research and industry.