Less than one in four Australian Year 7 to 10 students have a qualified maths teacher every year according to new data released by the Australian Mathematical Sciences Institute (AMSI).

Co-authored by AMSI Director, Professor Geoff Prince and AMSI Schools Outreach Manager, Michael O’Connor, Crunching the Numbers of Out-of-Field Teaching reveals 76 per cent of students will be taught by an out-of-field teacher at least once and 35 per cent of students twice in the first four years on high school. Worryingly 8 per cent will be taught by out-of-field teachers for all four years. 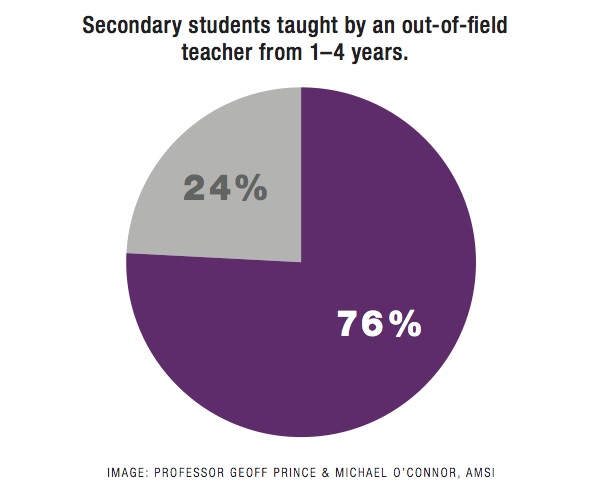 AMSI Director, Professor Geoff Prince said the new modelling undertaken by the Institute confirmed time was running out for action. He warned any solution would need to include both new recruit teachers and retraining to bolster the existing out-of-field teaching workforce.

“These are crisis figures. Australia’s mathematical capability cannot be put at risk for another two decades, the time to act is now and must include those already in the classroom,” said Professor Prince. 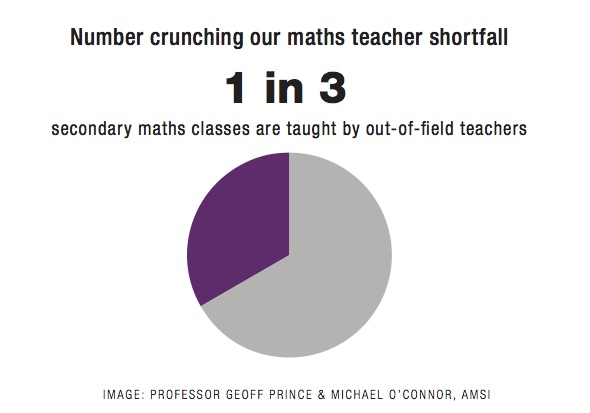 At least 200 current out-of-field teachers would need to be retrained for every 1000 new graduates annually to reduce rates to 10 per cent within ten years. A five-year solution would see this figure soar to 600 current teachers for every 1000.

These figures cast doubt on an aspirational ten-year recruitment solution posed earlier this year by the Australian Government.

Professor Geoff Prince, said it was clear it would be impossible to meet the current shortfall and match retirement and attrition rates without upskilling the teacher workforce.

“If we do not support graduate recruitment with retraining of existing out-of-field teachers, it is unlikely we will see rates fall to ten percent within the next two decades,” said Professor Prince.

With maths a must for 75 per cent of growth employment areas and worth over $140 billion to the Australian economy, the pair is urging both sides of government to do the maths on policy to turn the tide on out-of-field teaching.

AMSI Choose Maths Outreach Manager, Michael O’Connor, who has seen first-hand the impacts of out-of-field teaching through his work with AMSI Choose Maths, said the cost of inaction was evidenced by the falling number of students participating in mathematics.

In 2016 only 7 per cent of Year 12 girls undertook advanced maths compared to almost 14 per cent of boys.

“Over the past twenty years the number of students taking advanced and high-level mathematics has fallen dramatically, out-of-field teaching plays a key role in student engagement and retention,” said O’Connor.