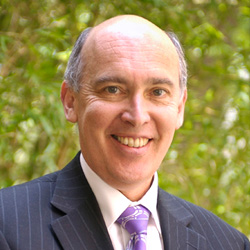 Tim Brown has been Director of the Australian Mathematical Sciences Institute (AMSI) since 2019 following several years as Professor of Statistical Data Science at the University of Melbourne.

Other academic positions include:

Research interests have been in probability, especially probability approximations and stochastic processes, applied statistics and educational measurement (with applications to Year 12 moderation, scaling and interstate-transfer).